When you’re out scouring the countryside on your ATV, you can lose yourself in the moment, navigating rugged terrain, getting lost amidst the diverse surfaces such as gravel, dirt, thick mud and smooth road. It’s just so easy to feel like you don’t have any concerns in the world.

However, there is one thing that is likely to bring you crashing back to earth, and not in a fun way – it’s losing your ATV keys.

But it can happen. You might have already set up camp miles and miles away from home, hours away from any kind of civilization such as a rest stop, when you might suddenly realize that your keys have gone astray. You have a few options: leave your camping equipment and ATV unattended in the wood whilst you make the 10 hour round trip to find a replacement set of keys or find another way of starting your ATV. 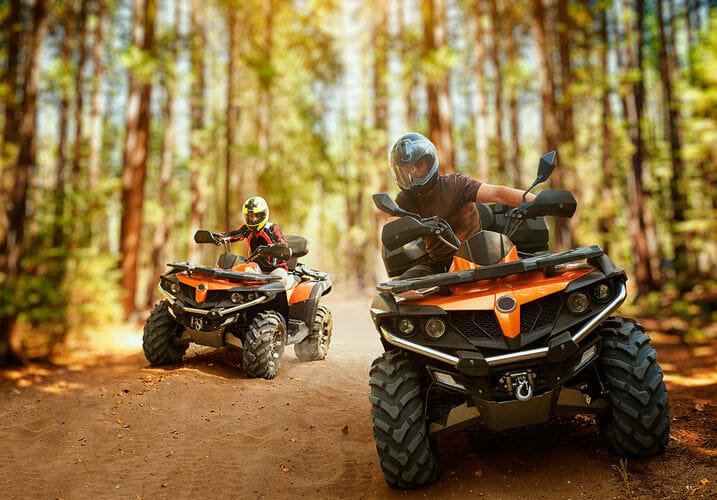 Yes, we thought it might not be a hard decision to make. Nobody wants to be stranded in the wilderness and run the risk of having their gear stolen whilst they’re looking for help.

But don’t worry, help is at hand! With our 7-point plan for success that will allow you to restart your AVT without the need for keys at all! So before you grab your waders and goggles and get ready to hit the turf, read our list so you can get yourself out of any keyless ATV situation.

7 Ways To Easily Restart Your ATV Without A Key

We’ll start off with the simplest option in case you’ve lost your keys before leaving the house. If your keys have gone AWOL just get a new ignition and key set. These are relatively inexpensive and easy to install. Or you can go to your nearest dealer if you don’t feel capable of replacing this yourself. 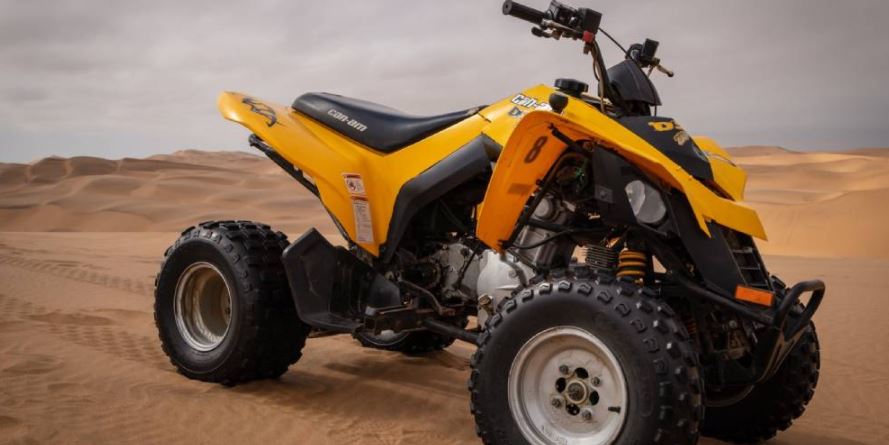 Another blatantly obvious solution that some people overlook is just having a new ATV key cut. There are a number of ways you can approach this.

Firstly, most ATV keys have a serial number inscribed into them. If you are stranded, ring someone who may have access to a spare key at home and get them to relay the serial number to you. Then take a note of it, ring your nearest ATV dealer and read them the serial number down the phone. They should be able to find you a replacement key that matches that serial code.

However, if the key is actually lost and you have no backup, you can tell your dealer the model of your ATV and have him make a key based on that – hopefully, they’ll believe that you haven’t stolen the ATV!

Another method of finding a replacement key is simply by trying to find a locksmith that will cut you a new one based on your old one. Although this certainly will be problematic if you have no access to the key whatsoever.

These first options are for those that have their keys to hand or they haven’t left their house yet. But what if you’re stranded and there’s no possible way that anybody can get you a key? Well, it might be time to start tinkering under the hood of your ATV.

Taking apart your ignition will mean you accepting the fact that you will have to buy a replacement ignition as soon as you get home, as this is a very short-term solution. This method is basically to manually replicate the lining up of the ignition normally triggered by your key.

If you follow these 4 simple steps, you should be able to mimic the functions of the key turning by connecting the two portions of the ignition that signals to the engine that it can start.

Another way to circumvent the functions of the ignition is by removing the key housing and exposing the red and black wires that start the engine.

These wires also send a signal to your ATV to start working immediately. All you have to do is strip back the wires – leaving enough in case you decide to replace the ignition switch later – and then touch the copper inlay together.

Once connected, the engine on your ATV should start. Remember to untwine the wires when you get back home, otherwise, the battery will drain dead overnight.

You might want to consider swapping the conventional key-ignition switch with an on-off switch to avoid the hassle of losing your keys in the future. However, those who still want the security that comes with a key ignition switch will want to keep the more traditional method.

Some ATV’s have numerous wires running into their ignition. Don’t worry, the only wires you should be focussing on are the red and black wires. Simply cut there two wires down to the copper and tape them together so the engine doesn’t cut out whilst you’re riding.

Use Scissors Or A Screwdriver

With this option, you’ll also have to accept the fact that you’ll probably have to buy a new ignition because this method might damage the ignition slot.

Basically, the screwdriver or pair of scissors will replace the function of the key. All you have to do is jam it into the ignition slot, force it open and turn it in much the same way as you would do with a key until the engine fires up.

This method is handy as most ATV riders who use their quad to go on camping trips might already have a screwdriver and scissors as part of their kit bag.

This next trick will only work on certain ATVs, namely ones that only have an electric start option.

The solenoid is a nifty little device that controls high amp load with a low amp. A starter solenoid can look different compared to your ATV, but most of them are either round or square and come with two large or two small wires running out of it. These larger wires are for the high amp load whilst the smaller wires are for the low amp switch. Some solenoids might have a smaller wire if it is mounted.

The solenoid should be located under a panel next to or under the battery and wiring harness. It could be under rubber, but often it simply fixed to the outside.

Focussing on the two big wires, you’ll have to lay a wrench across the connectors of these wires to fire them up. If you can jump these connectors then you should be able to start the engine.

You have to be careful when using this method, as if the wrench comes into contact with anything else, then it might not jump the engine. If the wrench touches the metal frame of your bike whilst doing this, you might end up shorting out some of the electrical apparatus inside your bike.

This is another method that will rely heavily on the ATV that you own. What you have to do is change the wires underneath so that they bypass the ignition switch, so the circuit is left exposed and the spark will start the engine.

There are three different methods of doing this, each one presenting their own unique challenges.

The above method is probably the easiest way to hotwire your ATV, even for people with very little knowledge about car electrics. If you follow these instructions carefully, you should be able to restart your vehicle with minimal fuss.

Finally, this is another option that will only work on certain ATVs. Thankfully, a lot of manufacturers of ATVs have foreseen scenarios whereby riders will lose their ignition keys and have built-in a failsafe mechanism in the form or pull or kick starts.

To enable your pull or kick start, simply follow these 3 simple steps:

Ultimately, this will depend solely on your knowledge of the specific model of ATV that you own. Consulting the manual before leaving on a protracted journey should make you reliably informed of whether your ATV has a pull or kick start feature, as well as where it might be located.

Hopefully what our handy tips for starting an ATV without a key will have taught you is that your key is not something essential to start your ATV. There are plenty of means and methods of hacking into your ATV vehicle – although you might want to keep these to yourself, as you don’t want to give potential thieves easy access to your ATV!

How Does The Ignition Key Work?

Once the key is in the ignition, that sends a signal to your engine to start running. Once turned, the ignition opens a circuit that allows a spark to ignite the engine. When the engine is ignited, assuming your engine is functioning properly, then you can start riding. But how that spark is achieved is not dependent on the key, as we have seen above. 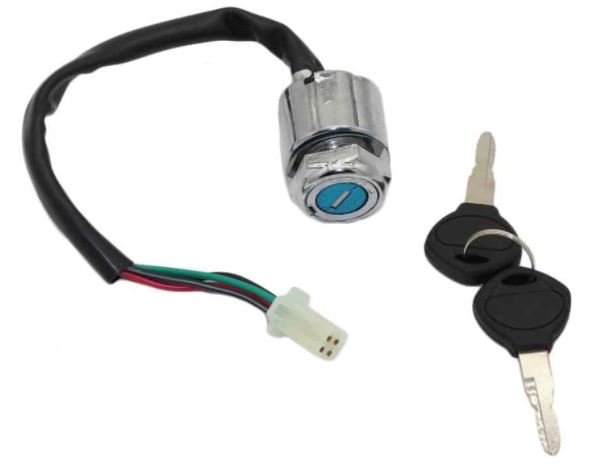 Asking yourself such questions before going out on the road will certainly help you when deciding on what to do. Those who think that there’s no chance of finding their ignition key will want to opt for the first few options of a permanent ignition replacement. Hot wiring or overriding the ignition is never a long term solution, as these are dangerous and can result in a loss of power or a short in the electrical equipment of your ATV.

As you have seen, tools can play a crucial role in helping to start your ATV. A screwdriver or a pair of heavy-duty scissors will certainly act as key replacements when you need them the most, so it might be worth investing in some of these items to carry with you on longer ATV jaunts.

As mentioned above, some keys have serial numbers which will help you when ordering a replacement with your dealer. However, don’t wait until you’ve lost your key to try and memorize this number. Write it in your phone now so that if, god forbid, the moment comes when you do lose your key, you’ll know where the number is straight away.

If you decide to hotwire your ATV, remember to leave enough slack in these wires when you’re stripping them down. If you strip the wiring back too far, you might not have enough to reattach to your replacement ignition switch, which will result in you having to replace your entire wiring system, meaning more time and money spent in the long run.

We hope that after reading this article you feel more equipped to tackle a keyless ATV when you’re stuck out in the middle of nowhere.