Whether you’re looking at what’s available or have already pulled the trigger and need to know exactly what it is you’ve got, sometimes the lines between what makes an ATV, a quad, or a four-wheeler can get blurred. There’s a lot of overlap and confusion between these three terms, so join us as we explain what they mean and where some of these misunderstandings may come from.

The closest of these terms are ATV and quad, so we’ll tackle those first before we explain what four-wheelers are. We’ll explain why and how these terms have, and continue to be, very interchangeable when in reference to quadricycles. 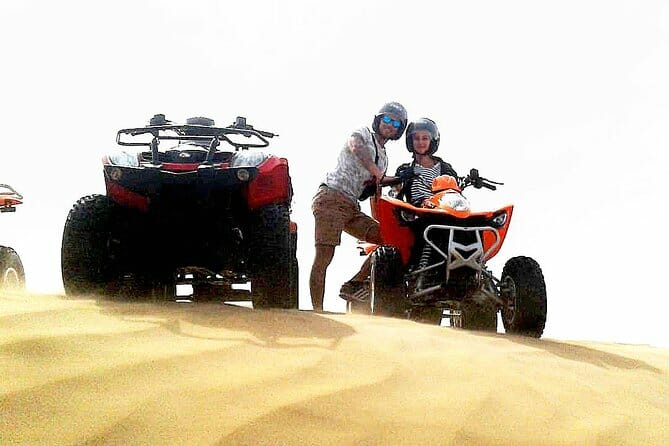 Difference Between ATVs and Quads

Before we get into some details, let’s sum the difference up in a sentence. A quad is an ATV, but an ATV doesn’t have to be a quad. So, what does this mean? First, we have to nail what each term means so we can all be on the same page. 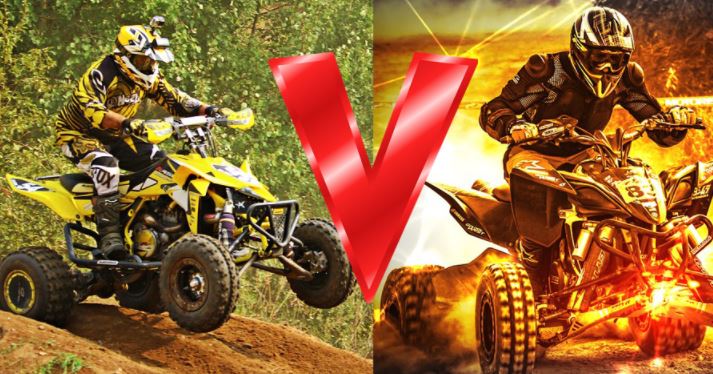 ATV stands for All-Terrain Vehicle, so, by technicality, when we refer to ATVs, we could be referring to that latest Jeep model you’ve had your eyes on or even a military-grade tank! ATVs can have any number of wheels, from two to six, or even use tracks and other means of off-road propulsion. However, ATV has become synonymous with quadricycles in normal conversation, to the point that people who say ATV are almost always referring to quads.

So, what are quads? Quads, short for quadricycles and otherwise called quad cycles or quad bikes, are motorcycles that use four larger tires to move. Even the definition of quadricycle includes that they’re often for off-road use, so it’s understandable that these terms will get confused. A quad is simply a more specific phrase for what most people refer to when they say ATV since it specifies that you are talking about the motorcycles with four wheels and not a different type of All-Terrain Vehicle.

With that said, in the industry, there can sometimes be a slight difference in the usage of the terms ATV and quads whilst still referring to the same kind of bike. Due to what ATV stands for, quad bikes that have more robust off-road performance are often called ATVs whilst more road-worthy quads stay quad bikes instead of ATVs on product listings.

This will change between sellers, of course, but it’s something to keep in mind. We trust that you know your way around the internet enough to buy ATVs when you need off-road performance and, if you need a more road-worthy quad, you can search for those online and find many results.

There’s a third term that we’ve yet to cover, that being four-wheeler. We probably don’t need to tell you that this is again even vaguer than ATV, so we’ll need to unpack what four-wheelers can mean, both generally and in the context of ATVs/quads. 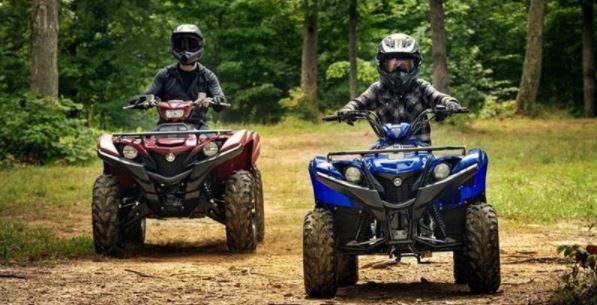 In general conversation, hearing four-wheelers is probably confusing since almost every vehicle in most American’s garages and backyards have four wheels. The term is vague enough that it can apply to the majority of personal vehicles that American citizens own. Cars, 4x4s, limousines, buggies, quads, even golf carts, you get the idea, they all fall under a four-wheeler vehicle, right? As you may have expected, four-wheelers aren’t as simple as just a vehicle with four wheels when used with ATVs in mind, but we’ll get to that soon.

In the meantime, just remember that yes, cars, quads, go-karts, pretty much anything with four wheels could be described as a four-wheeler. But that isn’t how we talk about those vehicles, we assume a car will have four wheels, so you’re only likely to encounter four-wheelers in the context of All-Terrain Vehicles.

So, with ATVs, the term four-wheeler is an important specification on what kind of vehicle you’re dealing with. As we covered above, ATVs can have as many as six wheels, usually with military-style vehicles. It’s also used in off-roading circles to specify when a quad/four-wheeled ATV doesn’t just have four wheels, but has four wheel drive. This means that so-called four-wheelers tend to be more powerful and more capable of taking on harsher terrain.

Sometimes it can refer to just the wheel count, too. For a short history lesson, It was only in 1982 that Suzuki released the first four-wheeled ATV model, the QuadRunner LT125, shortly followed by the LT150, a mini version, later in the 80s. When it was released, it was geared towards beginners to ATV driving as a stable alternative to three-wheeled ATVs, or what we’d call motorized trikes. Since four-wheeled ATVs were easier and more accessible to ride, they quickly became very popular, all while providing much of the same experience as three-wheelers. Nowadays, four-wheeled ATVs, or quads, are much more popular than motorized tricycles, so maybe the distinction isn’t as important as it was back then.

Regardless, know that modern four-wheelers in the ATV community usually means that it’s not just a four-wheeled vehicle, but all four of those wheels have drive behind them.

Hopefully, this has cleared some of your concerns. When all is said and done, all three terms overlap, and the main difference between the terms is how specific those terms are, simple as that.

Based on their hard definitions, the most specific term is quad, because it refers to a four-wheeled motorcycle that you sit on and ride around, usually on rural and off-road land. When you say quad, there’s very little room for a different interpretation that doesn’t mean quadricycle.

Then there’s ATV, which the term quad falls under, but so do other off-road vehicles and military-grade weapons. Most of the time, people will hear ATV and think of a quadricycle, and sometimes maybe a quad with a more robust off-road performance, but still a quad. Technically though, buggies, Jeeps, and tanks are all All-Terrain Vehicles.

Lastly, the broadest definition we’ve talked through today is four-wheeler. Despite how it sounds, it probably will never refer to every other vehicle out there that has four wheels in common conversation. In quad biking circles, however, the term four-wheeler is used to describe four-wheeled ATVs that are also four-wheel drive, meaning they generally have more power behind them than other quads.