50cc quads are generally targeted for kids. Hence, these quads will not go very fast and may have restrictions on them.

50cc is the general engine power used in beginner and kids, bikes, scooters, and quads, often with a maximum of around 30mph.

Parents are often advised to keep their kids on a quad with a 50cc engine until the child is a skill rider of at least 6 years old, or the equivalent on an average 6-year-old child.

Any 50cc ATV or quad that has at 4 gears can travel over 30 mph easily, however it takes a significant amount of physical strength to control an ATV at this speed. This is why there is a 50cc limit.

PS. Read about what can cause a four wheeler not to start right here. 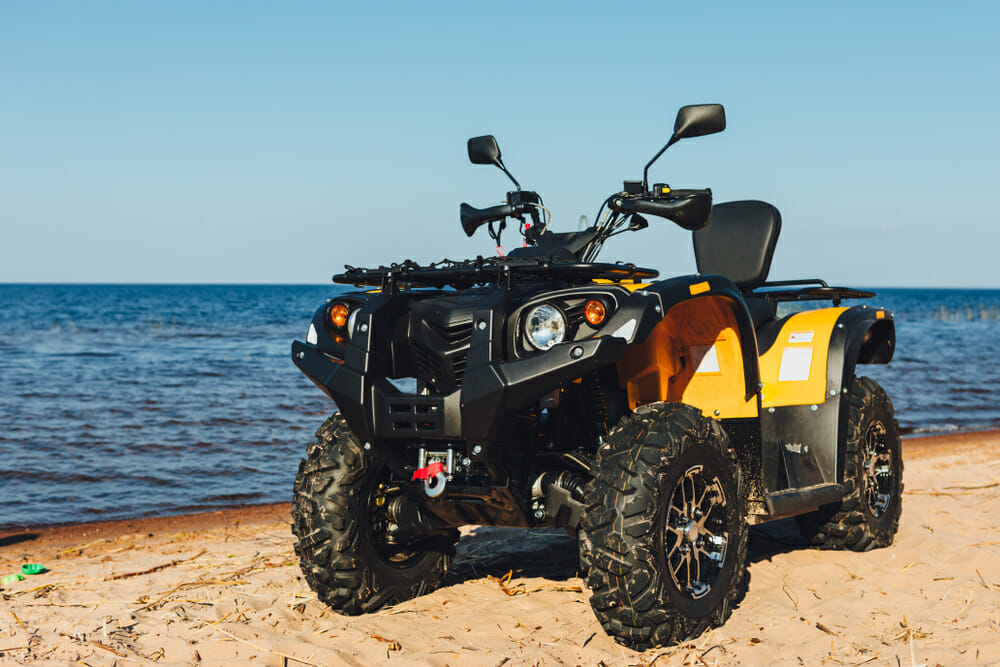 This is similar to two-wheeler vehicles for beginners, or children, the engine will always have a restriction on it, and it will usually always be at 50cc until the child is older, or more advanced.

Some 50cc quads may be able to reach 40 mph however this is at a push, and a majority will remain at 30 mph as the top speed. A 50cc quad/ ATV is a starter quad, these are the ones you will often see used in children quad races, or events, they are ideal if you are a family of ATV enthusiasts, and you want your kid to join in with the family on rides.

How fast does a 80cc four wheeler go?

Once your child has reached the age of 13 to 16, and has a bit more physical strength to control their quad, they can upgrade to a 70cc, and can go up to a 90cc but no further until they are older than 16. These are much bigger machines that go raster and are a bit heavier than their 50cc counterparts. These quads can hit around 40-45 mph if you are lucky, you can similarly modify them to go faster or slower, of course for beginners it is better to start slower and work your way up.

Starting with a smaller engine power, such as a 80cc as a young adult is good, because speed is not the only concern with a quad or ATV, you also need to consider the physical strength it will take to control the quad at higher speeds, which is gained with experience and practice. It depends on who the quad is for, what quad it is specifically and the level of experience of the rider.

How fast does a mini-quad go?

Mini quads are for very young kids, they are made from ages from around 4 years old until age 10. They often have a weight restriction of 90-100 kg. These are the ultimate starter quads for children, often sporting a 49cc engine, that has a maximum speed of 20 mph. Even though the top speed is very slow, adult supervision is still required when using one of these quads, because 20 mph is still very fast for a young child. The engine is usually 49cc which makes it powerful enough to tackle off-road terrain, as it needs to, without being so powerful that it is way too dangerous for a child to use. Many of these quads will also have a throttle screw which will enable the parent to decrease the amount of throttle pressed and restrict the speed of the vehicle, so that as the child learns they can slowly increase the speed up to 20 mph as they deem necessary.

This means that while the top speed is often around 20mph, the parent can have more control over the top speed at any given time to ensure the child’s safety. The lowest speed restriction that you can reach on a quad like this is usually around walking speed, which is generally around 4 mph. These quads are the best option for child beginners, despite how many low cc quads are capable of having restrictions added, these have the best restrictions for younger learners that allows the parent full control over the safety of their child.

How fast can a racing four wheeler go?

A racing four wheeler is generally categorized as a sport ATV, these are designed for competition and speed. They are often fitted with manual transmissions, narrow seats and rear-wheel drive. They have the purpose of giving the driver more control, so they can go much faster. Most of the most powerful ATV’s will reach speeds of about 80 miles per hour, however the average is usually around 50 or 60 miles per hour. It all depends on the engine. You can realistically race any four wheeler, with any engine size.

There are children’s tournaments which use 50cc ATV’s, or less. But for the more intense and adult races, ATVs will often have a much higher cc rating and speeds increase with it. While this is the average there are world records in this area, though we wouldn’t recommend trying to break these records. The fastest an ATV has ever gone was recorded in 2008 by ‘Terry Wilmeth’, the top speed was made on a Yamaha 700 Raptor, which had been heavily modifier with a hybrid rocket thruster.

Terry and the Yamaha made it to 196.19 miles per hour, which is rather shocking for a four wheeler. This was done with some extreme modifications, and it is not recommended unless you are a professional four-wheeler racer. But, as we say, the average top speed of a racing/ sport ATV can be anywhere between 50-80 miles per hour. Or more, depending on how much you want to modify it.