I feel the need, the need for speed - Pete “Maverick” Mitchell

Most riders, whether they’re on two wheels or four, have felt the need to push their vehicle to its absolute limit and beyond. It’s human nature. No matter what we have, we always want more. We always think that the grass is greener on the other side and something deep inside is forever urging us to reach for that much mooted and often promised “other side”. Nobody knows how to get there, but that doesn’t stop us from reaching for it with everything that we have.

The more we yearn to touch it, the harder we push, and the harder we push the further away it seems to get, and the further away it gets, the faster we need to go to reach it.  That innate, dizzying, and often overwhelming, desire for speed is part of our collective psyche, its who we are. And who are we? We’re gas in our veins, full throttle, no retreat, no surrender, ATV fanatics, that’s who we are. 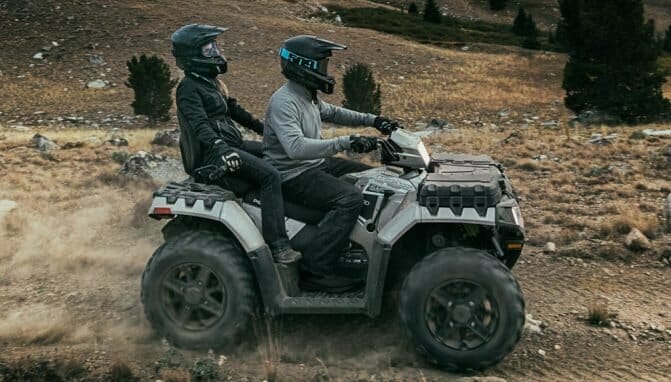 Because we know ATVs better than we know the back of our gloves, we know that, just like everything else, they’re governed by the law of inertia. That and the fact that manufacturers had the foresight to limit the engine capacity of most ATV’s and UTV’s so that we wouldn’t be able to circumvent Newton’s law and use greater force to propel our bodies and ATV’s way past the point they were made to be pushed.

They saved us from ourselves and in doing so, created a set of regulations that govern the top speeds that ATVs are capable of reaching.

table of contents
1 The Golden Number
2 Realistic Top Speed
3 Let’s Go Over That Again
4 How Is ATV and UTV Speed Controlled? What Limits It?
5 How Can I Make My ATV / UTV Faster?

What is that top speed? Unless you’re riding a souped-up, armed with a crazy engine that’s all show and even more go racing ATV or UTV, the simple fact of the matter is the maximum speed that any of us are going to reach on an ATV is eighty miles per hour.

Which, if you’ve ever sat on the back of an ATV traveling at that rate of knots, feels more like three hundred miles per hour and is, admittedly, enough to tear the face of off, and terrify the life out of, most mortals.

To get up to eighty miles per hour though, you’re going to need to be sitting on a high-end ATV that’s either been fitted or rolled off the factory floor, with a one thousand cc engine. Those are the golden numbers, one thousand cubic centimeters will push your ATV’s speedometer all the way up to eighty miles per hour. Anything less than that just won’t do it, no matter how hard you try to force it to.

The simple fact of the matter though is that most ATVs will never get anywhere near that speed and most riders wouldn’t feel comfortable attempting to do anywhere near that. The majority of road-going and off-road vehicles, both ATV and UTV use somewhere between four hundred and six hundred and fifty cubic centimeters of power to get wherever it is they’re going and wherever it is their rider wants to go.

Less power means lower speeds, and while we’ve talked about the mystical “golden numbers”, few of us will ever experience, or even come close to experiencing, them in our riding lives. We’re the many, and for the many, the best we’re likely to get is somewhere around fifty miles per hour.

Don’t get us wrong, fifty is just fine with us and while it might not seem like much on paper, on an ATV it’s a whole different ball-game. Fifty miles per hour feels like you’ve been fired out of the barrel of a gun when it’s just you and your ATV on a dirt road.

A lot of us started riding ATVs when we were young, and the laws governing engine and youth-orientated ATVs are incredibly stringent.  They’re in place for a reason and while it may seem like a good idea to try and amp up those fifty, seventy and ninety cubic centimeter models that your son or daughter is riding, believe us, you don’t want to and no-one will thank you for trying to do it.

The ten to twenty-five mile per hour speed range that the ATVs designed for kids fall comfortably in is more than fast enough for any child. We get it, we know how much kids can nag. badger and harass you about wanting to go faster, but whatever you do, don’t give in. The laws are in place for a reason, they’re meant to keep your kids safe so that they can grow up secure in the knowledge that one day when they’re ready they’ll get to ride bigger, faster ATVs. Who knows what the future holds? One day they might even get to reach the golden number.

But until they’re big enough, and have enough riding hours under their belts, let your kids be kids and ride their ATVs the way they were meant to be.

Let’s Go Over That Again

So, before we move on, we feel like it’s important to recap the basics that govern, restrict and in the case of the kid’s vehicles, enforce the top speeds that ATVs are capable of reaching. The be-all and end-all, dare to dream top speed of nearly all road-legal ATVs are eighty miles per hour, but you’ll never reach it if you’re not riding a full bore thousand cubic centimeter ATV.

For the rest of us, who’ve been there, seen it, and done it all before and now content to just enjoy riding for ridings’ sake, the four hundred to six hundred and fifty cubic centimeter ATVs we ride, they’ll hit the top end of what they can do at fifty miles per hour.

ATVs that are designed and built for youngsters and have motors that range between fifty and one hundred cubic centimeters, ensure that kids won’t be able to push their rides past twenty-five miles per hour.

And if you’re wondering how the size restrictions affect the performance of UTVs, well they run parallel to the top speeds of ATVs. Same size engines mean the same top speeds.  It would seem that ATVs and UTVs are cut from the same horsepower cloth.

How Is ATV and UTV Speed Controlled? What Limits It?

So the big question is, how do ATV manufacturers limit the speed(s) of their vehicles? How do they keep them compliant? It’s usually, but not always, down to two factors. The first is via a throttle limiter, which as its name suggests impedes the ability of a rider to fully engage and use the throttle.

While they’re an effective way to limit the speed of an ATV, they’re not meant to be a definitive means of controlling and inhibiting speed as they can be adjusted with a few simple turns of a screwdriver. While it doesn’t require a degree in mechanical engineering to bypass a throttle limiter, most riders don’t know they exist and if they do, have no idea how easy they are to circumvent.

The second is through an option that Can-Am, one of the bigger names in ATVs and UTVs favored and threw their weight behind, the digital key. These keys are made to control the performance of your ATV according to how they’re set up, and will, dependent on said set-up let you access every inch of power in your engine, make the top end available to you or just let your use your ATV as it was intended to be used, as a  street off-road and work vehicle.

Digital keys can also give you the freedom to let you decide how you want to use your ATV., and as you’re not limited to having just one, you can get a full set which will let you experience every facet of your ATV.

While they seem like the answer to every ATV and UTV enthusiasts dream, they’re not as popular as they once were, mainly because they’re incredibly expensive to buy.

How Can I Make My ATV / UTV Faster?

Okay, we know the whole top speed is a little annoying, and even though most of us are content with and happy to abide by, the fifty miles an hour limit (we’re not even going to imagine that we’ll even make it into the eighty miles per hour club), some of you probably aren’t.

That’s why we’re going to let you in on a little secret. You can modify your ATV or UTV to go a little faster with just a few tweaks and some everyday-ish aftermarket parts.

Let’s start with your exhaust. If you fit a larger exhaust to your ATV or UTV, it’ll let more of the gasses created by the combustion process flow out of the engine more quickly, and more gas out of the pipe means more speed for your vehicle. Sure, your ATV will be a lot louder, but it’ll also be faster.

The other easy way to squeeze a little more speed out of your ATV is by changing your tires, or more specifically the size of your tires. The bigger, fatter, grippier tires that are ideal for off-road use? When it comes to going a little faster on the road, they’re going to slow you down.

Their weight, size, and sheer volume of grip will inhibit your ATV, so if you want to add a couple of miles per hour to your top end, you might want to look a swapping them for sleeker, smaller tires.

But remember, if you do swap your tires out, it’ll probably impact the off-road ability of your ATV. It’’s a juggling act, and you’re going to need to decide what’s more important. Speed or hitting the mud. As far as tires are concerned, you can’t have both.

Then there’s the last and most expensive, option which is a full engine remap. This involves a very clever guy at a garage hooking your ATV up to a computer and re-programming your ATVs engine chip. He, or she, will tinker about with all of the settings and adjust them so you’ll get every ounce of performance out of your engine. It’s costly, but it works and if it’s a route that you want to go down you’ll easily be able to find a fully qualified specialist who can, and will do it for you. Providing, of course, you pay them.

That said, if you want to go faster or even reach the golden number of eighty miles per hour with one of the biggest street beast ATVs or UTVs you can lay your hands on, that’s fine with us, that’s your decision. We’re happy enough to cruise down the road and hit the trails at fifty miles per hour. It may be a little less than Sammy Hagar couldn’t drive at, but it suits us just fine.